Saving sea turtles may be just the start we need. 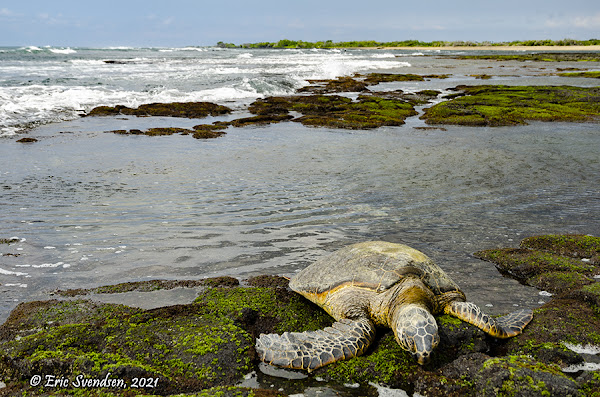 "Don't worry about it until they're endangered." That seems to be the mantra cycling through the minds of the general populace. Fish, hunt, pollute, capture, build, drain; these activities are all permissible until a species is just at the precipice of extinction. Then it is time to act. The great problem with this involves the destruction of ecosystems, the removal of keystone species from sensitive areas, and an unwavering belief that a species can make a comeback with numbers so thin that even a lottery ticket aficionado wouldn't take the risk. It wouldn't be a problem if someone cared before things got to that state. That, of course, is not true, because lots of people care; there is just nothing they can do about it. Corporations have the power to enact legislation to remove protestors. Forests get cut down. Vessels lose money if it takes too long to get goods to port. Whales become casualties of shipping. Free food is hard to pass up, es
Post a Comment
Read more 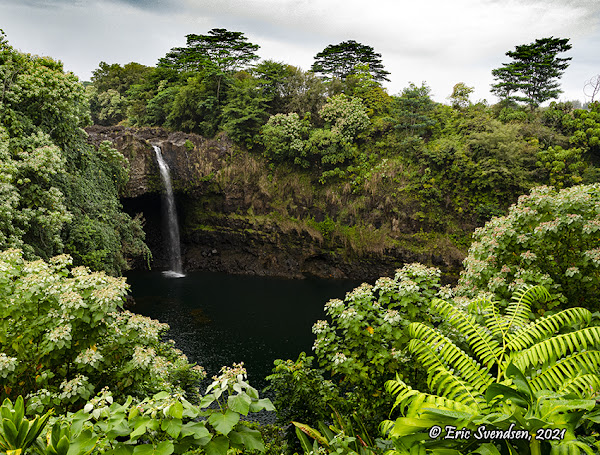 The term "old-fashioned" suggests both the passage of time and a refusal to consider a new approach towards achieving a goal. There are aspects of all adults, and many children, who could be accused of being antiquated in their actions or beliefs by not embracing modern methods. There are many people that come to mind when I reflect on the idea, my dad being chief among them. Although he has a cell phone, he doesn't make use of its features. The last computer he worked on was 30 years ago, and he couldn't write an email if his life depended on it. I have always found electronics fascinating and frequently embrace new technology, my pocketbook often being the limiting factor in acquiring any of it. I try to keep up to date in my camera gear and am currently thinking of switching over to mirrorless devices. But there is one thing that I don't ever plan on using in my photography; camera-based drones. I have always enjoyed being out and about with c
Post a Comment
Read more

Hairy woodpecker beside path; ignores everyone. 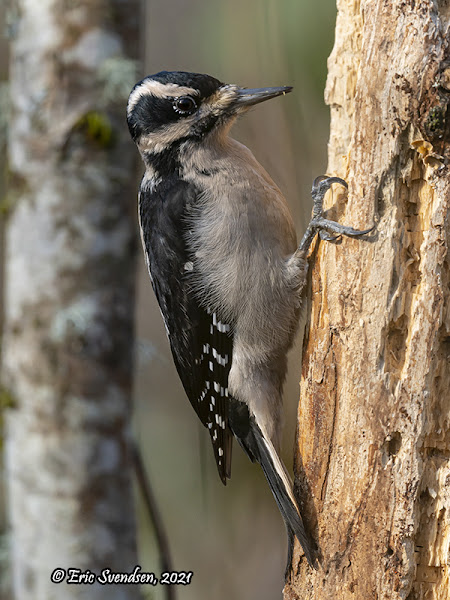 One of the reasons I like to do my birding along set pathways is because many of the birds are used to the presence of humans. People, for the most part, show interest in the birds but leave them alone. The birds learn that there is nothing to fear from humans, even when modest interest is directed towards them. When a bird is present, it is less likely to flee at any undue interest or approach. This isn't always true, but it way in this particular case. I had gone as far as desired and decided it was time to turn around and head back along the same trail. It wasn't too long before I heard the distinctive sound of a woodpecker hacking away at deadwood. I slowed down, looking for it, and continued my progression along the path. The more I progressed, the louder the sound got. Still though, there was no visual confirmation of what I expected to find. Immediately beside the path was a dead tree, maybe four inches in diameter. As soon as I came alongside the tree I
Post a Comment
Read more 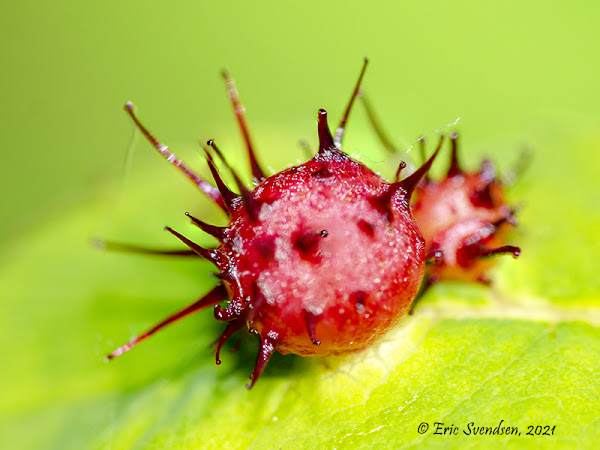 A gall is formed when an insect or mite bites into a leaf or stem of a plant. The plant responds with increased cell growth in that area in an attempt to heal the damaged tissues. There is something amazing going on between the plant and the attacking entity that causes the gall to form. There are two possible explanations. The first involves the insect possessing the ability to secrete plant hormones which cause the plant to respond by growing in that particular area. The two hormones gibberellin and cytokinin may well be involved. What an amazing adaptation these organisms would have that they would be able to fool the plant into constructing a temporary residence for them! The second explanation is even more peculiar. It seems that the gall's resident uses a process called lateral gene transfer, also called horizontal gene transfer. Genes are normally passed from cell to cell through mitosis or through meiosis which involves the unification of sperm and egg.
2 comments
Read more

Wasps belong to the insect order Hymenoptera. Many people associate painful stings with this group. Wasps are not all bad insects. They don't all sting or bite, and many of them are tremendously beneficial. There are over 17,000 species of wasp worldwide; most of them do not produce mud or paper nests and do not have complicated social hierarchies. In fact, most wasp species are solitary, won't or can't sting, and are harmless. The trouble I have with them is in identification. Have a look at the insect shown in the above photo. It is a wasp, but what kind? In the US and Canada there are over 4,000 species. There are the social insects such as wasps and hornets. There are solitary wasps that feed on nectar and pollen as adults and parasitize insects as larvae. Then there are the horntails and sawflies that add to the challenge of identification. I first thought the wasp was a type of Odontocolon, but the ovipositor (the long, curved end projecting off
Post a Comment
Read more 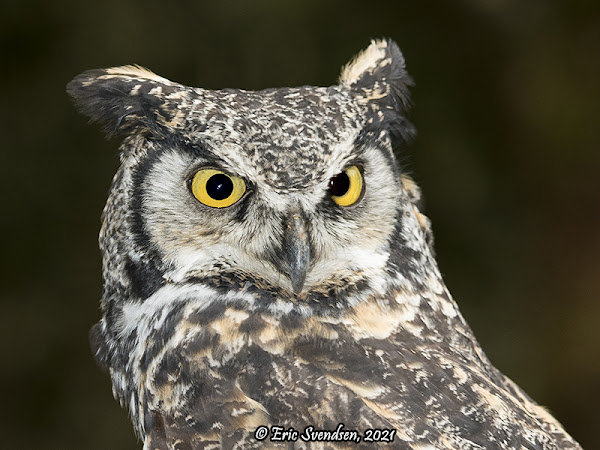 My post yesterday was about photographing owls and it hit a nerve with some people. The text below is an excerpt from that blog. "People feed birds at local feeding stations, hummingbirds take sugar from feeders, and many a duck and pigeon have benefitted from the hand of man. Feeding owls falls into the same category ...." It seems that "feeding owls" for the purposes of obtaining photographs is called baiting. I read the comments made by a number of contributors and have changed my mind on the subject. Baiting is a bad practice with negative consequences for the birds. Research I have done on the process has turned up the following points. All vertebrate species in BC are protected as part of the wildlife ac t. Of those species, some are considered at risk or endangered. In BC, there are 5 raptors on that list which you can find at this website . Endangered organisms have another whole level of protection that involves fines and imprisonment.
Post a Comment
Read more 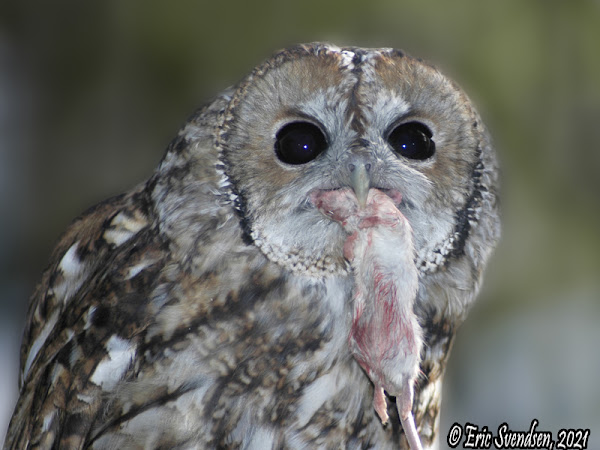 I photographed this barred owl back in 2008 while visiting a wildlife rehabilitation sanctuary in Bend, Oregon. We were there early and fortunate enough to find the animals being fed. I captured this shot of the owl as it held the forthcoming meal. The rescue organization rehabilitates injured birds and animals and releases them when they are healed. Those organisms that are too severely injured to be returned to the wild are kept on for educational purposes. They treat the animals well. This is one of the best owl photographs I have ever taken. Some of my noteworthy shots have been captured in the wild, but the truth is that most of them come from owls in captivity. Some are from zoos and others are from falconers that keep a variety of predatory birds. Owls have always interested me and I find it fascinating when I see photos of them taken by others taken in nature. Some of the more amazing ones involve one of these majestic creatures carrying off some recently acquire
Post a Comment
Read more
More posts